Last week, I wrote an article on ApeCoin, the new cryptocurrency launched to be “the primary token for all new products and services” from the Bored Ape Yacht Club (BAYC). I won’t go over previously covered ground, but to summarise it quickly, ApeCoin is an ERC-20 governance token; the thesis is that holders can vote on potential changes to Bored Ape Yacht Club, in addition to gaining access to exclusive events and merchandise, as well as use it for in-game currency.

After a bit of a volatile start (who would have guessed?) the coin has gone vertical, with a market cap of $3.7 billion at time of writing. BAYC have yet again proved that everything they touch turns to gold (although Bitcoin diehards may not like the choice of words in that expression).

Yuga Labs, the creator behind BAYC, followed up the ApeCoin launch by this week announcing that they had raised $450 million funding – equating to a valuation of $4 billion. The plan is to build out its own metaverse, titled Otherside. They also recently bought the intellectual property rights to two of the biggest rival NFTs: Cryptopunks and Meebits. As Cardi B would say, they’re making money moves.

By all accounts, BAYC are building a juggernaut here. What has separated these cartoon apes from the thousands of run-of-the-mill NFT projects is the focus on community. If you own an Ape, you don’t merely hold a piece of art. The NFT serves as a ticket to events (including exclusive Miami Yacht parties plastered all over social media), merchandise, airdrops, social gatherings and countless other perks. Exclusivity and scarcity breed demand when marketed correctly – like Kanye West releasing only a certain number of his Yeezy shoes, to use a real-world example. And when you leverage the power of celebrities to advertise it (Eminem, Snoop Dogg, Serena Williams, Steph Curry to name just a few), the sky really is the limit.

But it all makes me a little uncomfortable, for a couple of reasons.

In the airdrop of the tokens last week, each holder of a Bored Ape received 10,094 ApeCoin tokens. At current prices, that equates to mouth-watering $134,000 simply appearing in holders’ wallets, without having to do anything. And, recall that there are only 10,000 of these Apes and the floor price is currently 103 ETH, or $313,000. So, this is a small collection of already-very-very-rich people getting much, much richer.

Floor price of BAYC since inception, data via OpenSea

But what’s the point of Web 3.0? Is it not a decentralised platform, accessible to all? Are we not hoping for a more democratic, transparent and accessible environment? And yet here we are, with an enormous consolidation of wealth at the top.

Take a look at some of the names involved in the $450 million fund raise:

Not exactly small timers – and not exactly cash-starved individuals or entities either. It continues what is a worrying trend in crypto – the rich getting richer, while ordinary investors often get caught holding the bag.

I’m not saying this will happen, but let’s imagine the scenario where ApeCoin plummets – which in the world of newly released alt coins, is absolutely normal. Who holds the bag? First, let’s look at the tokenomics: 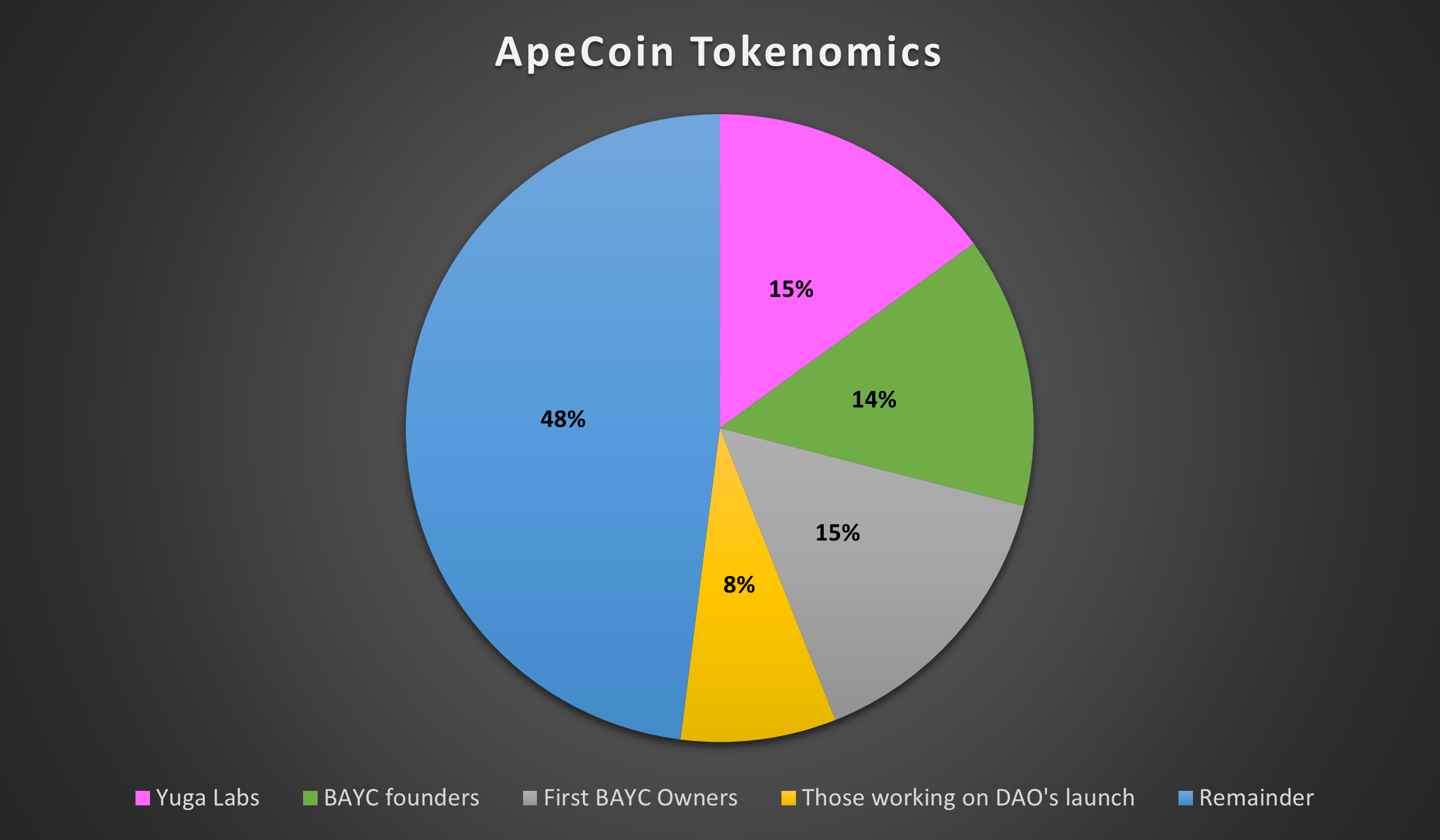 As I pointed out in last week’s article, it’s a hefty chunk of tokens locked up already – with only 52% remaining after Yuga Labs, BAYC founders, the first BAYC owners and those working on the DAO’s launch take their cut. If it was a less reputable name, I would be very very hesitant to get involved, looking at those tokenomics. That’s a large concentration that could be dumped on the market at any time, and a very centralised distribution of wealth.

If we plummet 70% from the $3.7 billion market cap, let’s say, it’s not those above parties that will hold the bag. They will still be massively in the black, making off like bandits. Unfortunately, it will be those late to the party – those who bought in following the hype this week. Remember, a 70% drop requires a 333% rise to make your investment back – the “bagholder’s equation” (patent for that expression is pending).

With the celebrity clout, marketing strength and already buoyant ecosystem behind BAYC, the launch of this token was an absolute no-brainer for the parties capturing that 52% cut above. And it’s similar for the venture capital funds and angel investors involved in the fund-raising round.

They will have their exit points marked, their profit-taking targets. Meanwhile, everyday investors, caught up in the hype via celebrity endorsements, screenshots of 100X returns from early purchasers and the typical crypto FOMO are the ones who end up footing the bill when it’s all over – the VC funds will have already gone home.

To be clear, I am not specifically talking about Bored Ape Yacht Club; they are merely the latest example. The token could go to $100 billion for all I care, and maybe everybody makes money – if so, happy days (although having never owned a cent but written multiple articles about them in their first week on the market, I would definitely be concerned for my mental health in such a scenario).

What I am referring to is the market-wide rise of VC funds in general in the crypto space, and the power they are yielding in what has become an increasingly uneven playing field – ironically, the exact opposite of what crypto strived to achieve. They have early access to purchase these coins and there is an informational asymmetry, as well as often less friction and fees.

These nascent alt coins are a playground for founders, VC funds and early investors, and “regular” investors need to be very careful when getting involved, because they are swallowing a lot more risk than the former parties. Sometimes these are malicious – the typical “rug pull” involves a founder wiping all the liquidity or dumping a large whale holding on investors – but some are just projects that simply never succeed, yet the founders and early VC funds still make serious bank.

So while Web 3.0 promised us all pure decentralisation and the absence of centralised entities, that’s not what we are getting here with BAYC, and the wider space in general. Yuga Labs yields significant governance power with their 15% cut, while the top holders continue to bank unfathomable wealth from the airdrops of these new projects and the ever-rising floor price. Just look at the blockchain they are operating on – Ethereum – which necessitates hundreds of dollars worth of gas fees – totally impractical for the average investor.

Yuga Labs do seem to care about the crypto community more than most, just to be clear in my opinion (they could have been a lot more self-serving with the IP rights for CryptoPunks, for example), but my general stance holds on the risks inherent in these business models, and the implications for Web 3.0.

I believe these governance tokens will continue to be issued by NFT collections, and I suspect many will go to zero – maliciously via rug pulls, or “naturally” fail with the founders banking returns regardless. And the bagholders will not be the VC funds, founders or insiders.

Decentralisation, while seductive and attractive in theory, is proving harder to implement as the natural genetics of capitalism continue to distribute the wealth inequitably. I still think decentralisation is too critical a component, and, more importantly, too many people in the community care about it .Therefore I am still optimistic these are growing pains and will be ironed out with time.

But the emergence of powerful behemoths such as Yuga Labs and the VC funds behind it do remind me of the dangers of the space. And for retail investors foaming at the mouth while FOMO eats away at you, please be careful.